This post was inspired by ABCWednesday's weekly meme, and "Bully" movie coming out this week in NYC and LA (April 13th in other selected locations).

I have chosen to write about Laika because this week an extraordinary film "Bully" is being shown in LA and New York City and (as of April 13th) in selected theaters throughout the country about bullying.  I think the two stories are in some ways, connected. Both Laika's story as told by Nick Abadzis and the film, I hope, will help all of us be kinder to those not like us, not as strong, and those less fortunate.

Laika's story:
Laika was a stray dog who found her way into the Soviet space program and was chosen to be the first animal to be launched into space.  She was found wandering the streets of Moscow, was an 11 pound female mutt approximately three years old who had already endured conditions of extreme cold and hunger. While her true pedigree is unknown, she was believed to be part husky/part terrier. While the Soviets knew Laika would not return, the goal of sending her (aside from the propaganda agenda) was to prove that a living passenger could survive launch, orbit, and endure weightlessness, paving the way for human spaceflight. Historical Background: The 1950's was a time of tension and competition between the Soviet Union and the United States and the space race was one of the frontiers to feel this tension.  After the success of Sputnik 1 - the first satellite to orbit earth, Nikita Khrushchev, the Soviet leader wanted to launch a spacecraft with the first sentient being into space on November 3, 1957 - to commemorate the 40th anniversary of the Bolshevik Revolution.

Sputnik 2 Mission: With the goal of making a public statement in mind, Khrushchev and the planners decided to have a dog orbit in Sputnik 2, an obvious precursor for human space travel. At this point in time, little was known about the impact of spaceflight on animals AND the technology to return from orbit had not yet been developed.  There was therefore, no expectation of Laika's survival, nor was there any reference to whether animals could survive launch or survival in space once in orbit. The Soviets, therefore, were under no illusion - Laika would not be returning.

According to Russian data recently released, the official decision to launch Sputnik 2 was made in October, giving the team about 4 weeks to design and build the spacecraft.  The Soviets had been planning on sending a canine up for some time and had narrowed the selection to three dogs, from the initial 12 they began training.  Aside from carrying Laika, Sputnik 2 also carried instrumentation for measuring solar radiation and cosmic rays.

Laika's training: Laika and two other dogs were trained by the Soviets for this mission.  To adapt the dogs to the confines of the tiny Sputnik 2 cabin, they were kept in progressively smaller cages for periods of up to 20 days. The animals were placed in centrifuges to simulate the acceleration of a rocket launch and in machines that simulated the noise of the spacecraft.  They were also trained to eat a special high-nutrition gel that would be their food in space.

Laika's flight:Sputnik 2 was equipped with an oxygen generator and devices to avoid oxygen poisoning and to absorb carbon dioxide.  A fan, designed to activate when the cabin exceeded 15 degrees Centigrade (59 degrees Fahrenheit) and food for a seven-day flight was provided. Laika was placed in a harness to  restrict her movements in the tight capsule (so she would not be tossed around the padded cabin or hurt), and was fitted with a bag to collect waste. Her heart rate and respiration were tracked as was her limited movement in the cabin.

Documents have shown that after launch and reaching orbit,  the nose cone was jettisoned successfully, but the "Block A" core did not separate as planned and this prevented the thermal control system from operating properly.  Some of the thermal insulation tore loose, raising the cabin temperature to 40 degrees Centigrade (104 degrees Fahrenheit).  Heart rate and pulse monitors showed Laika was under stress but she did eat some food, and after five to seven hours into flight, no more life signs were received from the space craft.

Sputnik 2 made 2,370 orbits and returned to Earth after traveling 100 million kilometers on April 14, 1958.  The satellite dropped out of orbit and the spacecraft with Laika's body burned up upon entering Earth's atmosphere. Laika likely died within hours of launch and while the initial report was that she died when her oxygen ran out on day six, her actual death - from overheating - was not made public until 2002.

As noted in Wikipedia, In 1998, after the collapse of the Soviet Union, Oleg Gazenko, one of the scientists responsible for sending Laika expressed:


"Work with animals is a source of suffering to all of us.  We Treat them like babies who cannot speak.  The more time passes, the more I'm sorry about it.  We shouldn't have done it... We did not learn enough from this mission to justify the death of the dog."

On April 11, 2008, the Russians unveiled a memorial for Laika - a stature and plaque at Star City, Russia, the Russian Cosmonaut training facility.

The graphic novel: Nick Abadzis and First Second Books have published an extraordinary graphic novel detailing Laika's story. It is an excellent read for kids (8+) and adults.  Nick Abadzis' graphic novel, while telling Laika's story also relays the political and ethical issues faced by the scientists, politicians, animal handlers and trainers. We learn from words, images and great graphic design about the emotions and issues facing Laika and her trainers.

This panel is one example. I love how Mr. Abadzis portrays the trainer's blank face.  On the one hand her opinion is clearly of no value to her superiors.  On the other hand, she cannot show emotion or her true feelings because she would have been relieved of her job.  Throughout this incredible book and story we see the interplay of language, art, color, and graphic design.

Teaching suggestions.  Laika by Nick Abadzis can be used to teach and discuss:

Thank you for visiting.  Please leave your thoughts, reactions, and opinions in the comments. Have a great week.
For those interested, below is the full page 143 further detailing the author's use of color, graphics, image and prose.  It's a great book and reading in its entirety.  It is a wonderful statement of humanity.  We see the director taking Laika - out of the lab, with the image of a bereft, helpless trainer (notice this use of black/white foreground and background).  Notice also the director's face.  He's sad, and we see in the remaining images that he has taken Laika to his home, to play with his children before she is sent into orbit. 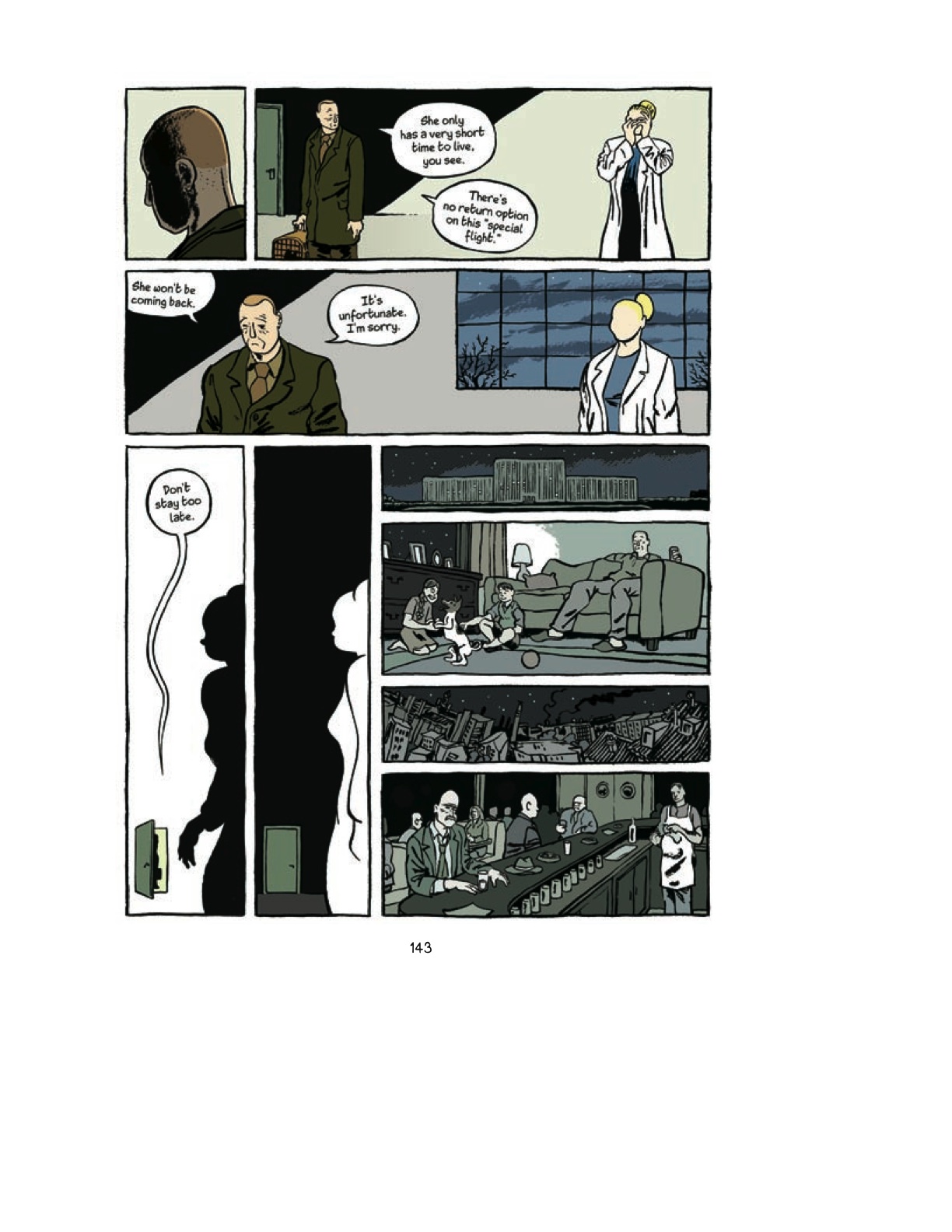 Thanks again for your visit.
Have a great week.
Posted by MERYL JAFFE, PhD - parent, psychologist, teacher, author... at 12:11 PM