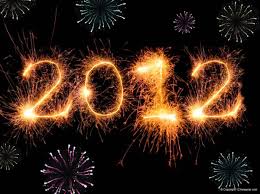 3 days ago
3 days ago
In line with ABC Wednesday's "Y" week and the close of 2012, I thought I'd share my favorite non-fiction and historical fiction kids' graphic novels with you.  Each of these works would be assets to home and school libraries and lessons. For those of you interested in a wider reading list, I have also included links by other librarians and graphic novel aficionados listing their 2012 favorites as well.


I thank you all for your visits this past year, and wish for all of us that 2013 be a year of peace, prosperity, good health, happiness and success. 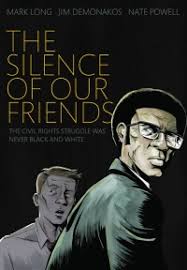 Silence of our Friends by Mark Long, Jim Demonakos and Nate Powell (First Second Books, Grades 6+) - a true story about a while male reporter and his family living in Texas during the Civil Rights Movement. The father must make career and life choices while trying to do the 'right thing.' The struggles of segregation and the Civil Rights movement are clearly and sensitively depicted.

Baby's In Black by Arne Bellstorf (First Second Books, Grade 6+) tells the story of the early Beatles (pre-Ringo) and their life in Germany before Ed Sullivan and their rise to fame.  It is a wonderful look at Europe in the 1960's pop culture and the significant cultural 'happenings' and salons that shaped our modern culture today.

Marathon by Boaz Yakin and Joe Infurnari (First Second Books, Grades 6+) tells the story of Eucles and The Battle of Marathon. Eucles, an Athenian messenger in the year 49 ran over 300 miles to save Ancient Greece from being subjugated into the Persian Empire. The Battle of Marathon was the turning point in ancient history, and the foundation of the modern Olympic games.

Victory - Book 3 of the Resistance Trilogy by Carla Jablonski and Leleand Purvis (First Second Books, Grade 5+) Relates how a family in France, torn apart by World War II must deal with decisions made in Books 1 and 2, and the consequences each member faces as a result as the war draws to an end.

XOC by Matt Dembicki (ONI Press, all ages) follows the journey of a great white shark from the Farallon Islands off the coast of San Francisco to Hawaii and back. The author uses exceptional prose, vocabulary and alliteration as he describes the life of a female shark and the perils (natural and man-made) she must face on her journey to spawn her pup.

Sumo by Thien Pahm (First Second Books, Grades 9+) is a wonderfully affirming story for teens and young adults that things will work out as told through an aspiring football player turned sumo wrestler.  Readers learn about the sumo wrestling culture and discipline while following the story of Scott's move from the US and his NFL dreams to Japan. 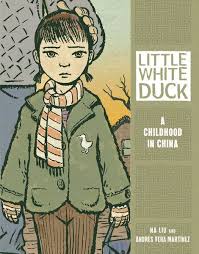 Little White Duck: A Childhood in China by Na Liu and Andres Vera Martinez (Graphic Universe, 2012) is a collection of eight moving stories based on the author's life of her childhood in China during the 1970' and 80's.  Here is an excerpt of a review from The New York Times ( "A Child's View of China" November 9, 2012 by Gene Luen Yang)


"“Little White Duck” isn’t Communist propaganda. It is at once more innocent and more sophisticated. What Liu and Martínez do is convey a child’s-eye view of a country in transition. Politics, culture and history play into their stories, but the reader’s awareness of them is a child’s awareness. The mural of Mao and the ancient gods and the colorful posters encouraging patriotic behavior are probably important, but fireworks, schemes to catch rats and pretty jackets with soft little white duck-shaped patches are so much more interesting."

I'm Not a Plastic Bag by Rachel Hope-Allison (Archaia, All Ages) is a wordless graphic novel that illustrates human impact on our oceans as it follows a used plastic bag that begins as refuse on the top of a leafless tree in the city and ends up as part of The Great Pacific Garbage Patch.  There is an extensive  appendix at the end of the book with information on The North Pacific Gyre (Great Pacific Garbage Patch),  Top Ten Items Found in Ocean Debris, Descriptions of Threatened Marine Wildlife, and How You can Help.

Continuing Non-fiction/Historical Fiction Series of value for home and school:

Thanks again for your visit.  Please leave your favorite 2012 reads in the comments.  I look forward to many fascinating visits and comments, to reading stimulating posts, and wish you all the very best in 2013!